There are many reasons to mourn the absence from the public space, and in some of our lives, of Jonathan Ball, the outsize SA publisher who died prematurely of cancer at 69 in early April.

Ball was a consummate and brave book publisher, a combination of coruscating wit and curmudgeonly opinions, and a paid-up member of the small club of people whose contributions to their society and environment were net positive.

The news last week of the sharply falling share prices of Naspers and its subsidiary, Prosus, put me in mind of one of the many lunches I shared with Ball. Since he commissioned and published four of my books, and his preferred means of engagement was over food and several libations, the meals were many, and each rather memorable. 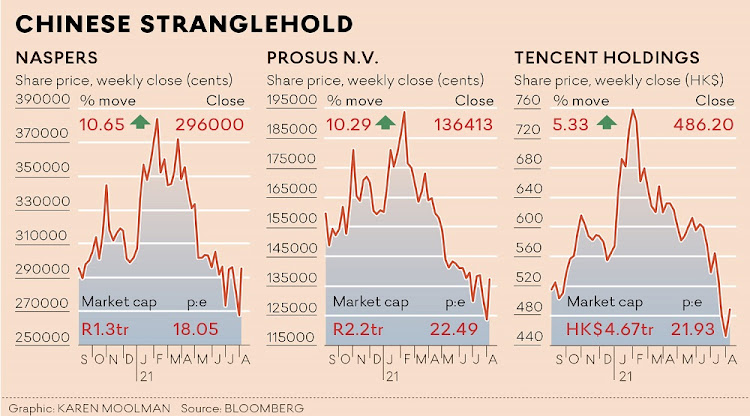 Ball’s moods, which ranged from charming to foul, often tracked with precision the share price of Naspers, which wholly owned his eponymous publishing company and of which he was a shareholder. He followed its market performance closely. When the price of this SA-originating behemoth was up so was his mood, and when in the doldrums or worse his humour darkened.

And the decline (relatively speaking for a top-performing company) has been fairly steep. Last week’s downturn caps a difficult year for the global internet group and technology investor. Its price has declined more than 28% since its high in February, so any imagined lunch right now with dear Jonathan would be a fairly gloomy affair.

Of course, the reason for the current fall-off in market sentiment has everything to do with the largest, hitherto golden, egg in its corporate basket. Hong Kong-listed internet company Tencent Holdings, in which Naspers has a 29% share, accounts for 80% plus of the underlying net asset value of the latter. Hitherto, Tencent’s even steeper (36.7%) drop in price since February was the motive cause for Naspers’s downswing, as the Marxists term it.

Strangling this golden goose is the Chinese Communist Party (CCP) government, which has decided to constrict Tencent, Alibaba, Didi, and other superstar technology companies with a welter of regulatory restrictions, crackdowns, and bans. Two that have hurt Tencent profoundly have been the recent clampdown on online games — beloved by the young everywhere, especially in China, but slashed by the official Chinese media company (hence the government) as “electronic drugs” and a form of “spiritual opium”.

The earlier edict outlawing private offerings for online education is a reminder that a totalitarian state of the size and with the appetite for power of the CCP wants no competitors when it comes to instruction and learning. Both hurt Tencent profoundly.

At one level — aside from the discomfort this crackdown has caused the vast army of Naspers shareholders and other investors — it seems utterly self-defeating for China to undercut its own growth trajectory by kneecapping some of the top-performing technology companies in the world.

Referencing a speech Xi delivered last year that was published in the CCP journal Qiushi, It distils the distinction in ways that suggest Naspers might have done better to have bought a share in arms making rather than smartphone games. “Social media, e-commerce and other internet consumer companies are nice to have, but in [Xi’s] view national greatness doesn’t lie in having the world’s finest group chats or ride-sharing.”

By contrast, Xi thinks the Chinese priorities are far off the Tencent offerings: state-of-the-art semiconductors, electric car batteries, aircraft and telecoms equipment. His goal, according to Ip’s gloss on the speech, is “to retain China’s manufacturing prowess, avoid deindustrialisation, achieve autonomy from foreign suppliers”.

For a government that, even before the ascent of Xi, erected the “great firewall of China” to control the internet, the common disorders associated everywhere with the dominance of big tech companies become acute in totalitarian China. If Western democracies are deeply worried now by big tech’s overreach — from the dissemination of “fake news” to invasions of privacy — these reach levels of paranoia in a modern dictatorial state of the size and with the global ambition of China. Hence the itch to regulate.

The SA government usually regards China and its economic model — indeed, aspects of its political system — as worthy of emulation. Of course, this is impossible for a range of reasons. Many hard-pressed residents of looted KwaZulu-Natal would probably have been relieved if a ruthless crackdown on lawlessness had been offered by our enfeebled state.

The Chinese People Liberation Army would have been likely — and with deadly force — to have crushed the weeklong anarchy in about half an hour.  But the same citizens would recoil at the price tag and add-ons a totalitarian state provides. For the hallmark of totalitarianism is, according to political philosopher John Gray, “the state’s attempt to transform society and intrude into every area of human life”.

While such local worshippers at the altar of state control as trade, industry & competition minister Ebrahim Patel and public enterprises minister Pravin Gordhan might entertain such delusions, they lack the totality of means and the coercive sway over corporates to do so. There is a constitution with some teeth, and investors with a world of options to choose from.

China, beyond its political ruthlessness and lack of internal constraints, has the ultimate trump card— its size. Its 1.4-billion population, the biggest consumer market in the world, renders it largely immune to foreign pressure and investor leverage. Small market countries such as our own are not so blessed, or perhaps cursed, given the predations of totalitarianism. This single fact explains why Naspers, Tencent, Alibaba, Didi and the rest put up with being ordered around and even shut down in some of their operations. Operating in any other country they would up sticks and depart for friendlier jurisdictions.

The other big difference between Chinese totalitarian capitalism and our more unsuccessful — in terms of delivering on either growth and jobs — state-led model is its ruthless determination to join means with ends. So, the president of China does not fantasise about smart cities and bullet trains, as Cyril Ramaphosa did two years ago. In China, usually, the announcement heralds the imminence of the project or its timelined completion.

Xi and others of his school of command and control practise the idea that the state allocates capital to the markets; in democratic states, it is usually the reverse. Thus, as China unleashes its assault on internet companies, according to the Wall Street Journal “it is simultaneously showering subsidies, protection and ‘buy Chinese’ mandates on its manufacturers”. Patel would dearly like to do the same, but Xi has a bazooka and Patel is armed with a pea shooter.

There are eminently sound reasons to invest in China and access its enormous market and ever-expanding pool of middle-class consumers. But it is one thing to bet on a country with such impressive metrics and quite another to anticipate the change in the political weather there. Especially when the normal buffers offered by democratic capitalist states are absent.