A milch cow is defined by the Collins English dictionary as “a source of easy income”. In SA, governments at the national and local levels find that source in middle-class taxpayers and ratepayers — usually the same people. But now the milch cow is variously exhausted, overburdened or fleeing to foreign fields.

In addition to the multiple forms of progressive tax payable by individuals to the national fiscus, on the regressive tax front every taxpayer must also pay VAT on purchases of goods and services. Of some relevance in the run-up to the local polls on November 1, the same taxpayers are also in the main homeowners or landlords and thus liable for the mainstays of municipal financing: property taxes (or rates) and service charges.

And, as pointed out by former Free Market Foundation chair Brian Benfield, there is yet another form of stealth taxation not formalised on the SA Revenue Service’s website that arises through the government’s failure to provide basic services. His list includes purchases of home generators and inverters in response to load-shedding, and the need to fork out for private health care, education and security. 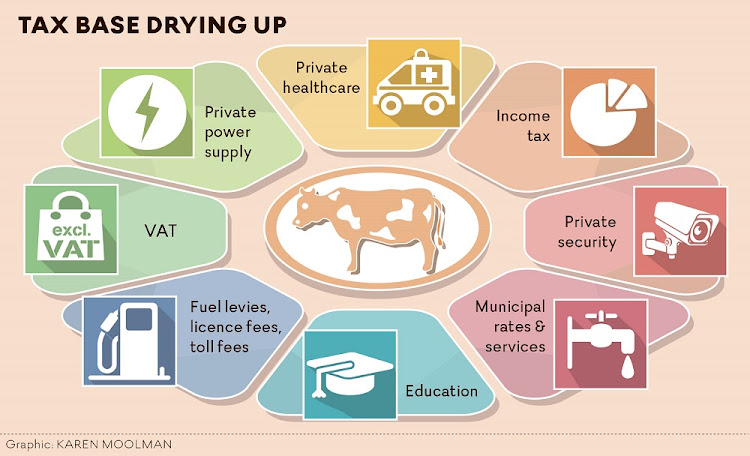 Politicians are good — especially during an election campaign — at ramping up the demand side (promises of more and better services) and almost entirely neglecting the supply side (who will pay for it all). The exception, interestingly, is the EFF, but its proposed solution for its expansive and ultra-expensive offering to the voters (free services, new houses in Sandton and the like) is itself already in practice in every municipality: “We will introduce a property wealth tax across EFF-governed municipalities … the people with big yards and big houses, we are going to tax them because they are rich. They must subsidise the poor,” EFF leader Julius Malema told supporters in Johannesburg at the party’s recent manifesto launch.

While no poll suggests there will be a single EFF-controlled municipality on November 2, Malema clearly has little understanding of how the property rating system that is now in place across every council actually works, or he has never personally inspected the rates assessment for his own property in Sandton — or the valuation roll on which the property tax is levied. It is precisely a tax on property (including improvements), and the bigger the yards and the larger the houses, to use his lingo, the heftier the rates bill.
Now across the major metros, rates account for nearly a third of all municipal revenues (R10.72bn in Cape Town, for example, out of a total city income of R35bn in 2018/2019). The rest is largely derived from service charges, which again are disproportionately borne by middle- and upper-income consumers. Malema would do well to consult the figures to calculate precisely why — in the current economically perilously times — the milch the cow is running dry. Bluntly, there is a diminishing pool of payers, which points to a looming crisis on the supply side of the ledger.
In March, Azar Jammine of Econometrix wrote that just 5.8% of South Africans pay 92% of all personal taxes, and likely the same narrow cohort the bulk of municipal rates too. Mutual financial service provider PPS indicated in September that in the past two years the number of taxpayers earning taxable income of R750,000 a year or more declined by 9,000. “SA is losing its tax base,” CEO Izak Smit noted.

And the number at the very top end of this cohort has been shrinking for years: last week Andrew Amoils of New World Wealth, commenting on yet another high-flying CEO flying out of the country, noted that 4,000 individuals with net worth in excess of $1m have emigrated since 2010. But of course the EFF constituency — though none of its leadership — is focused entirely on the poor and marginalised.

The two major parties that draw the bulk of middle- and upper-income support are the ANC and DA. Peter Bruce recently performed yeoman public service on these pages by reading the entire ANC election manifesto, concluding that “there is nothing, not a single word, of any merit or interest in the ANC manifesto. I have read it. I’ll never get that time back” (“Judging by ANC manifesto, joblessness will reign until Jesus returns”, September 29).

In Britain Keir Starmer, whose Labour Party is affiliated to the ANC via Socialist International, provided a useful reminder at his party conference that “without a strong economy we cannot pay for the good society”. Yet his clarion call went unheard at Luthuli House. Beyond the normal shibboleths — always honoured by their breach — there is not a single suggestion in the ANC document that will grow the economy, create a viable new rate base or a class of new consumers equipped to meet the service bills when they come due.

Most of the municipal revenues in Cape Town, Johannesburg and eThekwini are drawn from a tiny handful of streets and suburbs — the Atlantic seaboard, Sandhurst/Sandton and Umhlanga-Ballito respectively. Each of these areas returns DA councillors with hefty majorities, which is unlikely to change in a few weeks. But many of these homes are on the market, some of the ratepayers will emigrate or be forced to downsize, and there is no new platoon of high-net-worth individuals ready to fill the gap.

Yet even the DA’s local manifesto says next to nothing on the issue of rates and taxes and municipal payroll costs. Its 37 pages are peppered with examples of DA local delivery success stories and some innovative suggestions for fighting crime, cutting red tape, eliminating corruption and improving electricity supply. There is just one line, without elaboration, in the DA offer on “keeping staff costs down”. Yet in the major metros, including Cape Town, some officials receive salary packages and contractual terms that would be unobtainable in the private sector, in some instances significantly more than even the SA president earns.

There is no word or suggestion in the DA or ANC documents that these posts should be axed and the unaffordable and bloated municipal payroll trimmed. Yet without some decisive action on this front there is no prospect for rates relief for hard-pressed and Covid-cratered households, which are expected to continue to stump up, via their rates bills, for this largesse.

Only last week, for example — without a word of concern from any political party — the wage settlement covering all municipal workers was flagged by the National Treasury as a potential risk to the “local government fiscal framework and service delivery”. Its generous terms of employee costs increase (5.2%) exceed by some measure the national government pay hike for public servants (1.5%).

After the votes are counted, the dust has settled and the electoral battlefield clears, the bills will come due. But how they will be paid and who will be around to pay them has yet to be established, since the revenue cow is now well and truly milched.